Free Shipping to Europe for orders 600€ and above 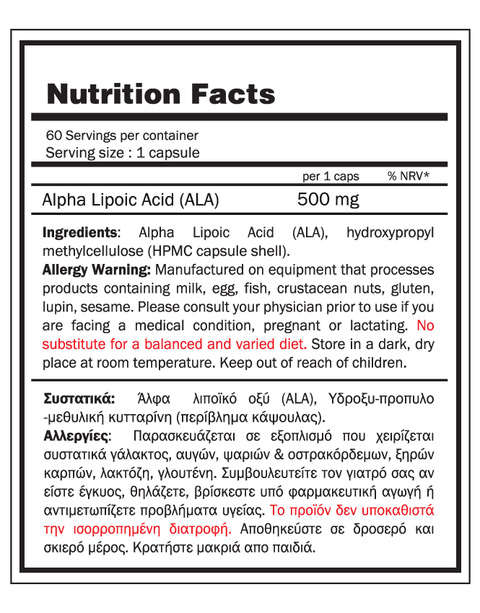 Alpha-Lipoic Acid (ALA) is a mitochondrial compound that can also be found in a variety of foods. Its primary role is to convert blood sugar (glucose) into energy using oxygen, a process referred to as aerobic metabolism. As a dietary supplement ALA has anti-inflammatory effects and is a potent antioxidant, meaning that it can neutralize free radicals that damage cells at the genetic level. ALA is referred to as: “universal antioxidant” because it is soluble in both water and fat, which allows it to work in every cell or tissue in the body. What is more, ALA regenerates other antioxidants including vitamin C, vitamin E, Q10, Glutathione.

Due to its effects on oxidation and inflammation, ALA has been linked to a variety of other health benefits, including immune system support, reduced skin aging, protection against heart diseases, liver diseases, diabetes, and neurological decline associated with aging.